The youngest Bay City Flyer member, eleven year old Jay Saffold, received a solo card in less then two months after his first RC flying experience. His dad, Michael Saffold, said Jay spent many hours on a simulator. Jay and his dad built the aircraft that Jay is holding in the picture. It's young individuals like Jay that provide hope that Model Aviation will find a secure place in the generations to come. From all of us to you Jay, congratulations for a job well done! 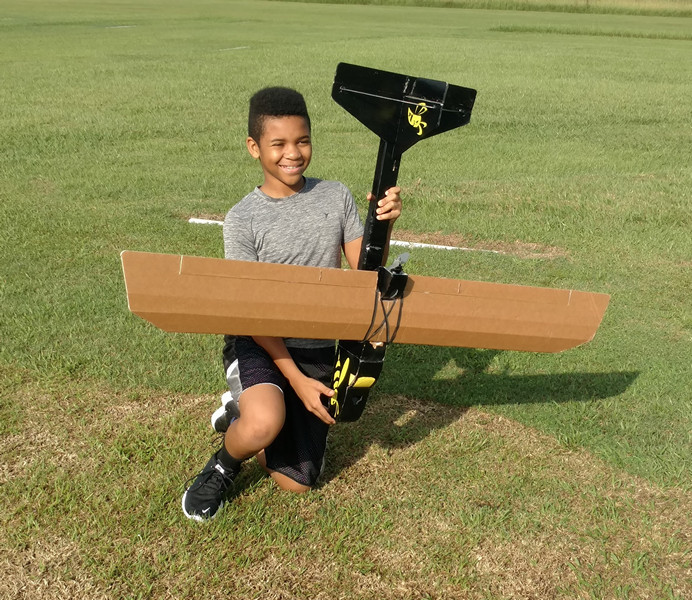 On Saturday, 9 November 2019, the Club held the Fighter Town event. With winds and rain prevailing, we were considering canceling this event. However, before the pilots meeting was concluded the sun broke through the clouds. Other than some wind, we had a perfect day and a good event. Due to poor weather conditions during the night and early morning, the pilot registration was low. However, spectator attendance, kitchen sales, gate donations and the 50/50 raffle all contributed to a profitable event. I would like to thank all those who helped me in the running of this event. Below are some of the highlights from the event: 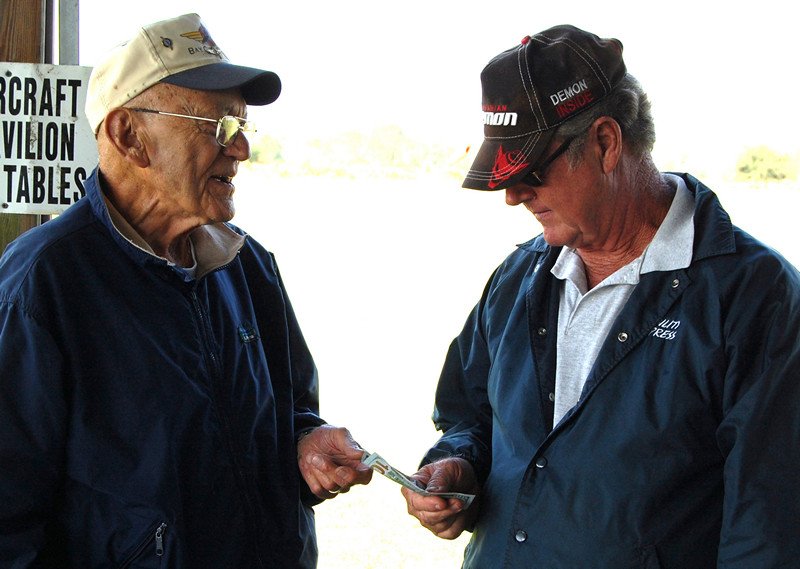 Larry Utt with his Hurricane: 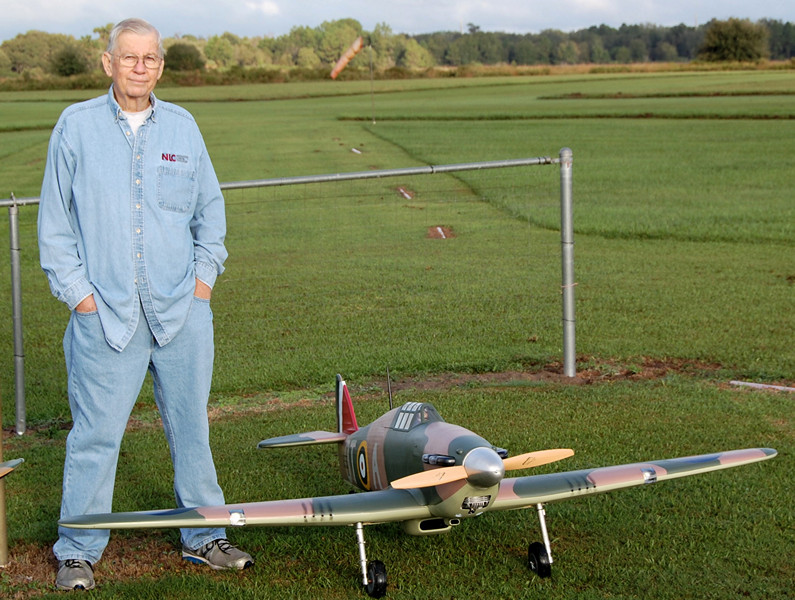 John Hartley with his Lancaster bomber:

Jesse Hinds with his WWI biplane: 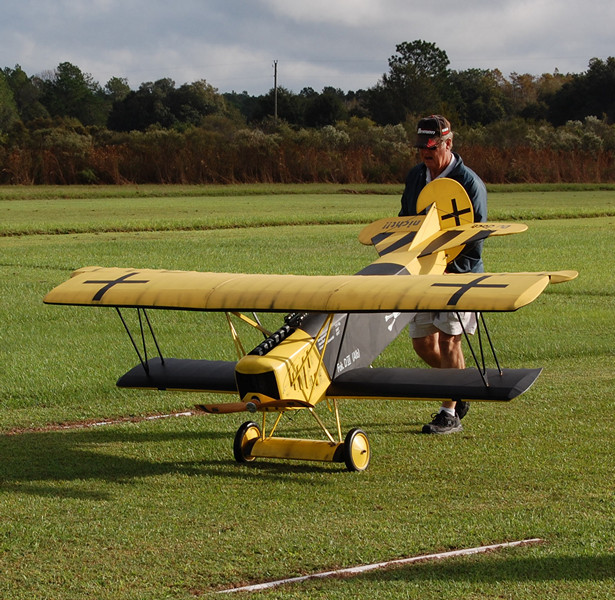 Good representation of aircraft from the Era: 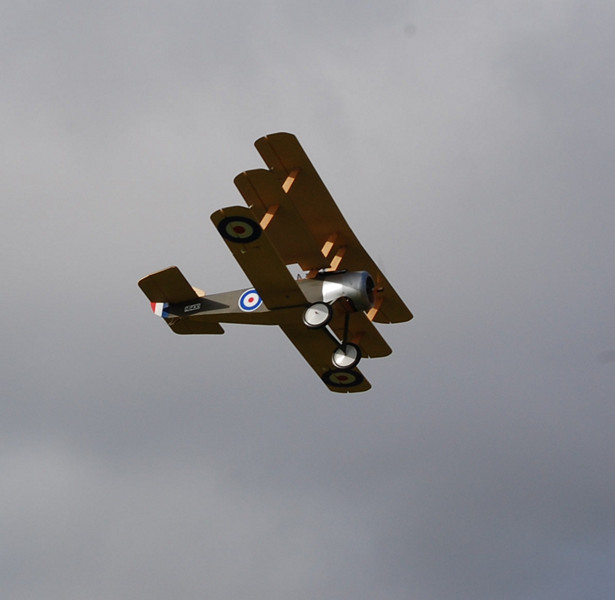 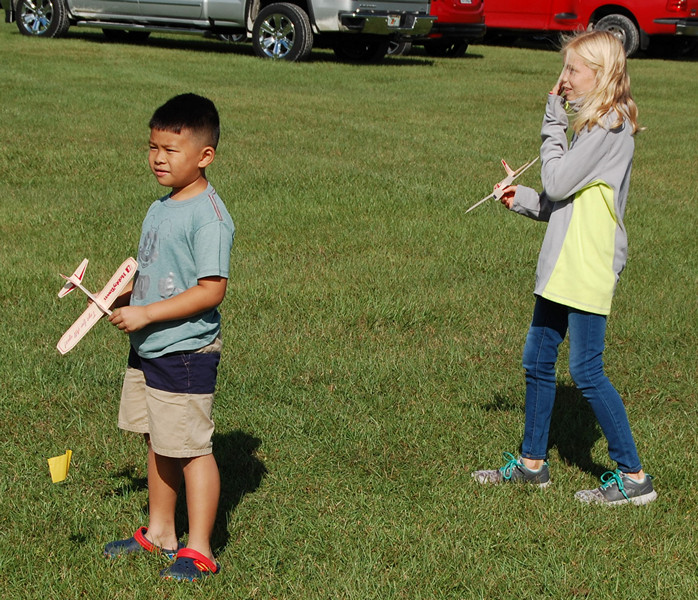 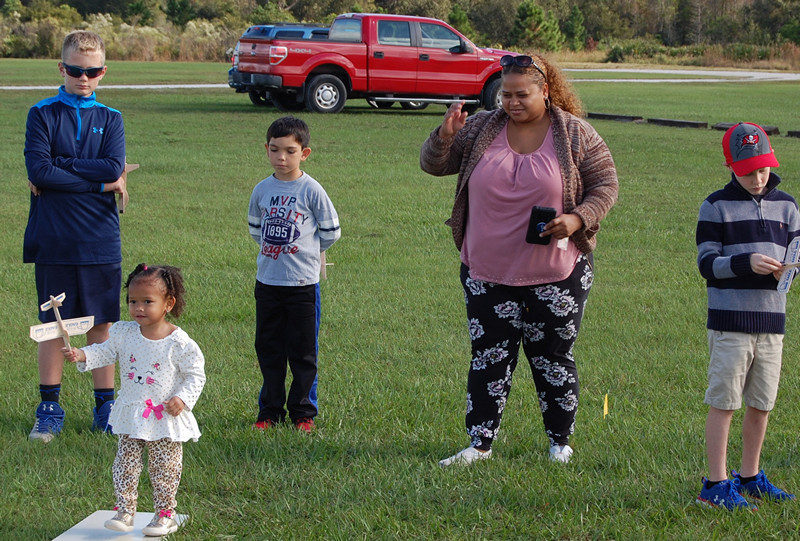 During the Golden Era main event (28 September 2019), Pete and Ellen Rundel organized and conducted a fun fly for all ages. It included parents, kids, etc. and awarded small prizes for several events.

From Mike Diesu, AMA Leader Member: Fred and Barbara Mulholland are spending much of their time educating young children about the world of aeronautics. Presently they are providing a free Fun Fly for kids at all our sanctioned events, with great success.

The Fun Fly consist of assembling small gliders either of balsa wood or paper and having the kids perform in contests at their age level. In addition, everyone learns to control the surfaces of a model using a radio. Rewards and candy are provided and everybody wins.

In July of this year Fred and Barbara visited the Primrose School in Land O' Lakes, Florida to put on a Fun Fly. First grade through fifth grade attended. The Primrose teachers helped Fred and Barbara due to the large number of students present. This was another successful Fun Fly. Bay City Flyers membership is proud of Fred and Barbara for their efforts to introduce young people to the world of aeronautics. 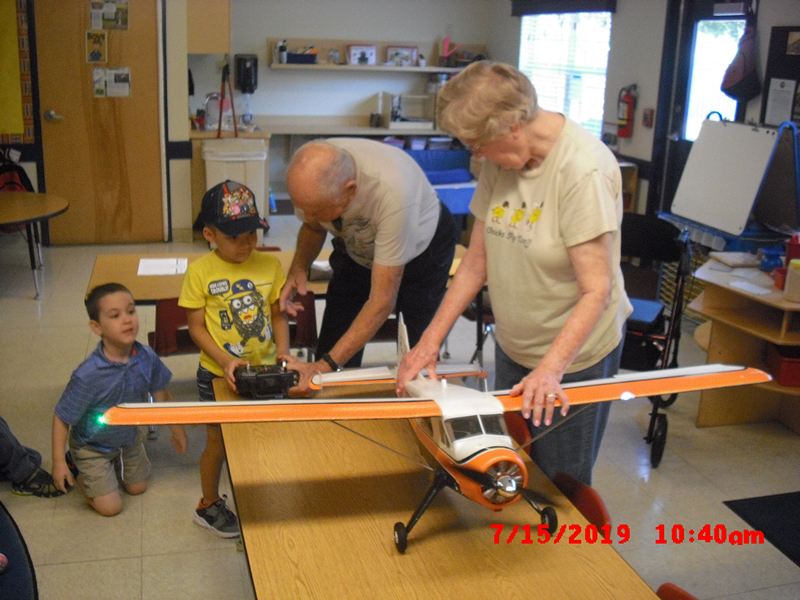 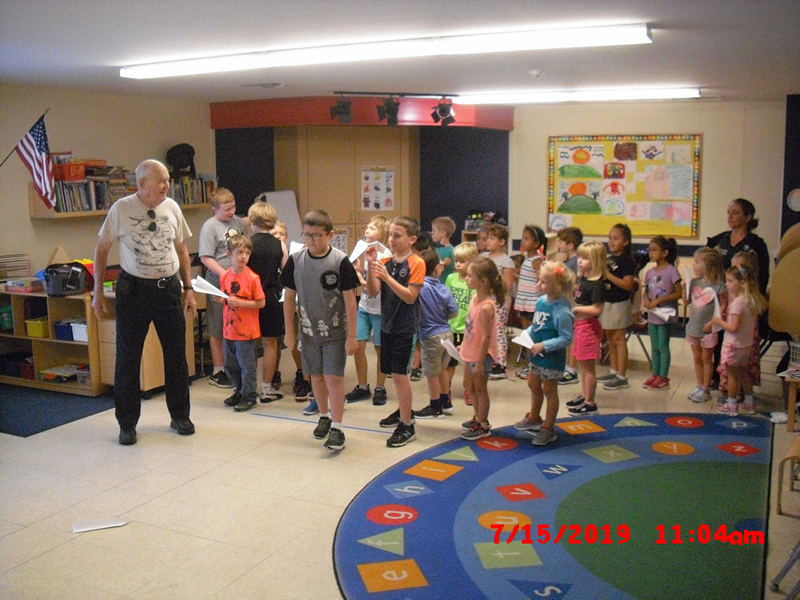 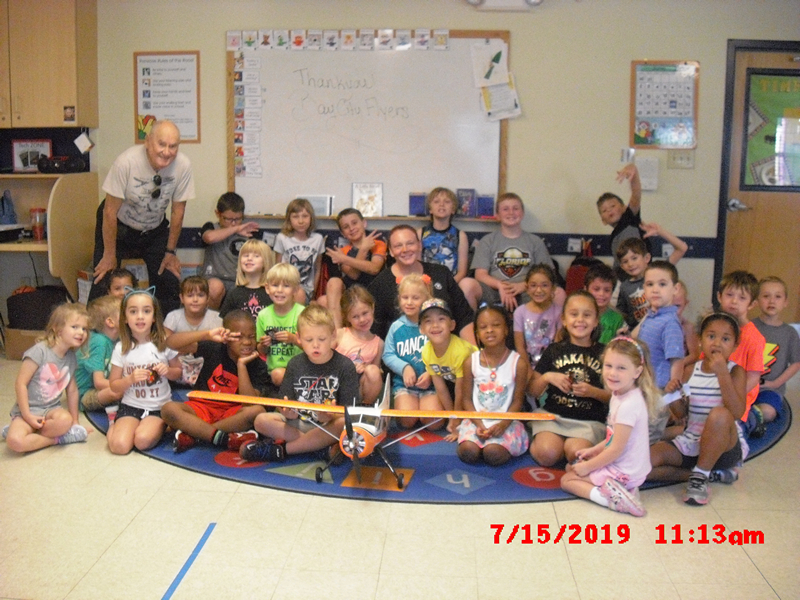 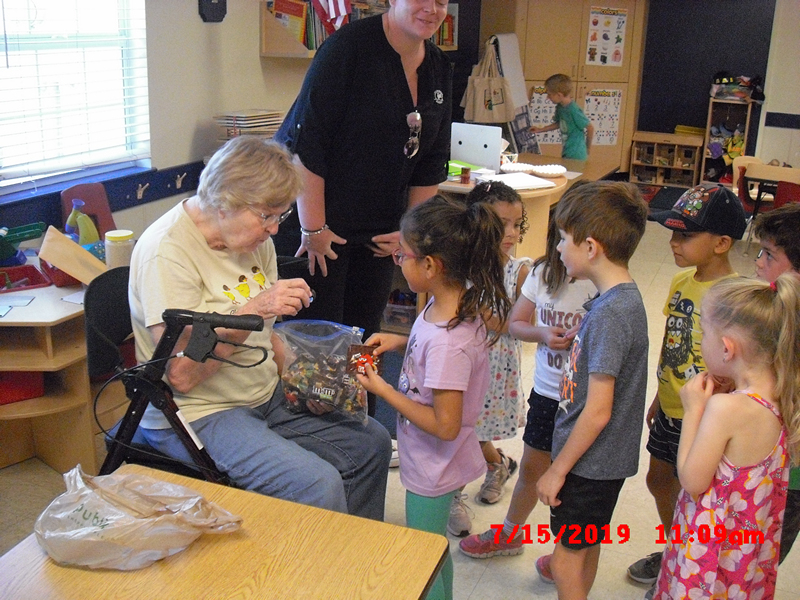 During the Croix de Guerre WWI meet (26-27 April 2019), Fred and Barbara Mulholland conducted a "Free Fun Fly for ALL Ages". It included parents, kids, etc. and awarded small prizes for several events including longest flight, closest to the center of the circle, and more. A total of 13 individuals participated! 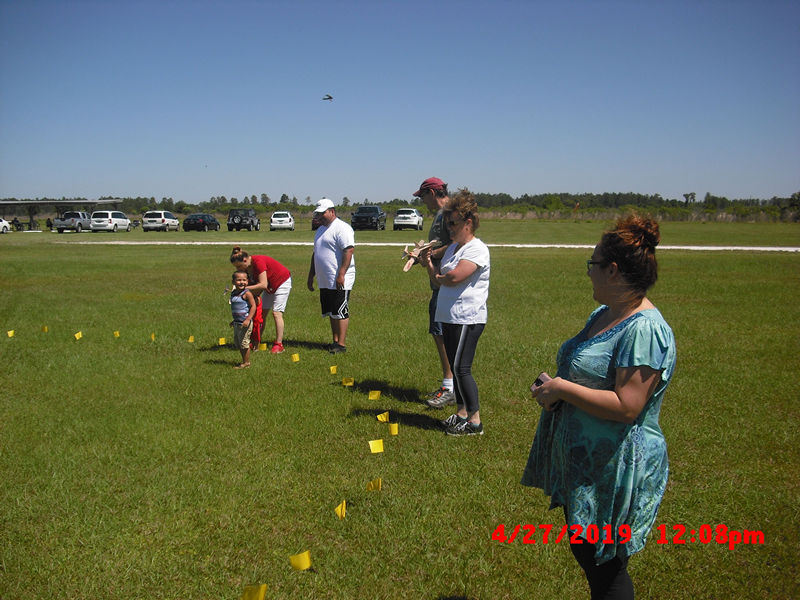 The Club had the latest work party at the field on Saturday, October 27, to fill holes on the runways, lay PVC pipes on the taxiways, and complete other miscellaneous repairs. The crew of 27 members worked hard, drank coffee, and had other goodies provided by the Club. Many thanks to them for their volunteering!

The Club had a work party at the field on Saturday, March 17, to repair the runways. The crew drank coffee, had their fill of donuts and spread a lot of dirt. They spread grass seed and dragged the field. A good time was had by all. Many thanks to them for their volunteering!

The following article appeared on The Laker/Lutz News on Thursday, November 30, 2017, to cover the Fighter Town event that had taken place at the Area 52 field on November 18.

Photos below were taken by Roger Cherry

4 December 2016 - Holiday Breakfast at the Field

On Saturday, Dec 3, 2016, in the spirit of the holiday season already upon us, the very-early-morning crew at the field was treated to a surprise breakfast, consisting of home-made sausage and toasted rolls, with all the trimmings. It was cooked and served by member Ron Haynes and was over before 8:00 AM, proving once again the truth in the old adage that it is the early bird that gets the worm, or, at least in this case, breakfast!

The photos below were taken by the Club’s official photographer, Roger Cherry.

Below is the letter received after the successful conclusion of the 2016 BCF Food Drive, driven by Joe Barzyz: 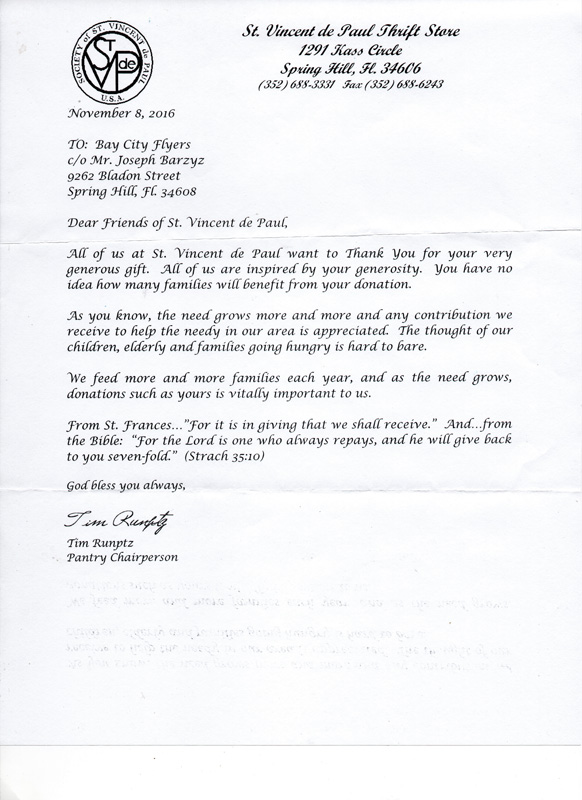 The Club will be ordering club jackets, if there are enough people who are interested. These are first quality jackets like the last ones we ordered. The cost is $75. Please contact Jim Slaughter ASAP, at This email address is being protected from spambots. You need JavaScript enabled to view it., if you want one. All orders need to be in by the end of November, at the very latest. Jim's cell number: 813-966-7529

The Club has been recently contacted by Mr. Ken Perry, on behalf of the Hillsborough County K-12 Special Needs School, about setting up a demonstration on November 17, 2016, in occasion of the Great American Teach-in day. The school is the Dorothy Thomas School, located at 3215 Nundy Rd, 33618 in the Lake Magdalene area in Tampa. Please contact Jim Slaughter, the Club Secretary, if you, or anyone else you know, would like to participate. Jim will provide more details. Jim's cell number: 813-966-7529

Welcome ME Hobbies, located in Lutz/Land O' Lakes. It is a great shop with a wide variety of items available. They have agreed to be a new club sponsor, giving 10% off to all Bay City Flyers Club members. Just show your membership card.

On a separate note, Charlie's Discount Hobbies in Tampa has closed for business.

The cadets belong to the AFJROTC radio control club and began making plans for the field trip to the Bay City Flyers' field. Several meetings were held where cadets learned the basics of RC flying and spent numerous sessions on a flight simulator which made the transition a cinch when the students arrived at the field on May 21st 2016. Once the students arrived, they were treated to a “continental” breakfast and then given a safety briefing and a familiarization trip of the field by the Bay City Flyer’s Club’s safety officer, Mr. Joe Barzyz. Next, they were divided into groups and teamed up with their instructor pilot. Several students honed their skills and some came close to soloing.

The Air Force sponsors AFJROTC in high schools and encourages JROTC students to participate in RC flying and even provides JROTC units with funding to help start flying clubs. AFJROTC is a program that teaches leadership and how to be a better citizen. It is offered at selected high schools as an elective course with over 100,000 students enrolled throughout the US and selected overseas locations. The course includes studies in Aerospace Science, Drill and Physical Fitness.

Overall, the cadets had a great time and many stated that they were hooked and planned on joining the AMA and a local club in the near future.

Most of the photos below were taken by Roger Cherry, the de facto Club official photographer.

At the April meeting, it was decided to buy two lipo chargers for the club trainer aircraft. Jim Slaughter volunteered to research and purchase them. Jim decided on a Hitec charger and then contacted Hitec and asked if they could provide the club a discount. They sold us two $200 chargers for $131 each! Thanks Hitec!

A brief note by President Werner Keil about this work:

".....On Saturday March 12th, we had a scheduled work party. We had a good turn out and lots of things were accomplished on the runways. It seems like when we have these events only a certain percentage of our membership seems to find their way to help maintain our field. It is everybody’s responsibility to step up and help fill the holes on the runway that the birds create. We should all thank the people that came out and worked hard to repair the runways. They are not your servants and they paid their dues just the same as you did, so in the future make an effort to fill the holes on the runway. Don’t complain if you don’t help. With the warmer weather coming, the grass will start growing and the grass cutters will be busy again, so when you see them, thank them for the job they are doing for everyone......"

Below are pictures showing the successful conclusion of the BCF Food Drive, with Joe Barzyz donating 2 carts of food and $395.00 in cash, collected during the food drive. 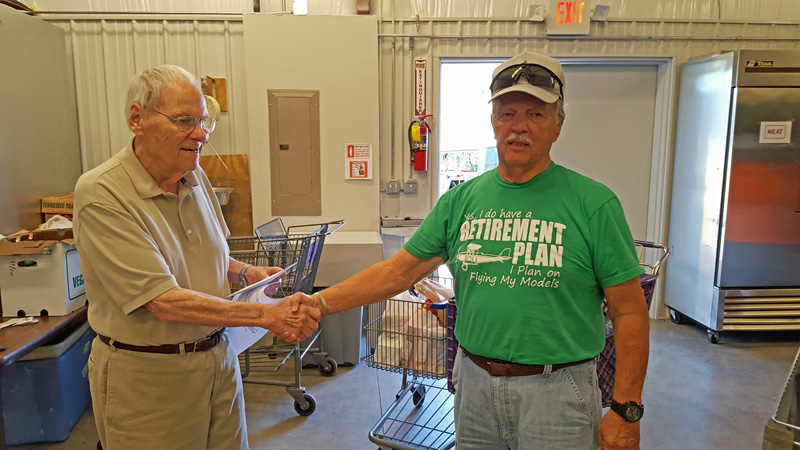 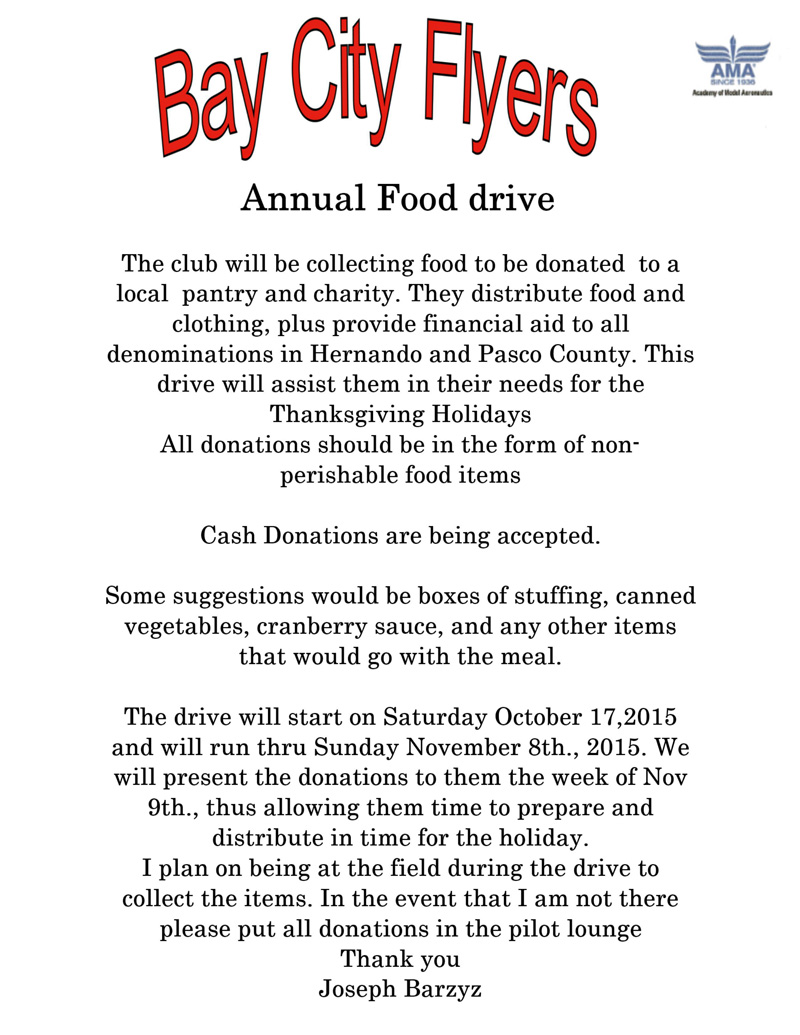 Contact info for Joseph Barzyz: 352-428-9242 This email address is being protected from spambots. You need JavaScript enabled to view it.

This an opportunity to save a few dollars, why not renew for two years?

After the heavy rains of the last many days, the Area 52 field appears only suitable to flying float planes. Should you intend to go there, you may want to wait until after some serious drying of the grounds.

Here are some photos, taken yesterday: 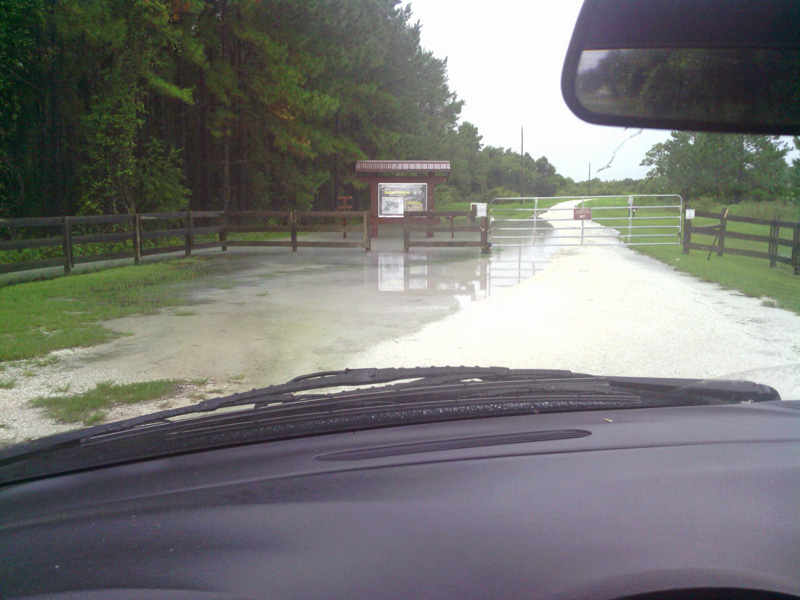 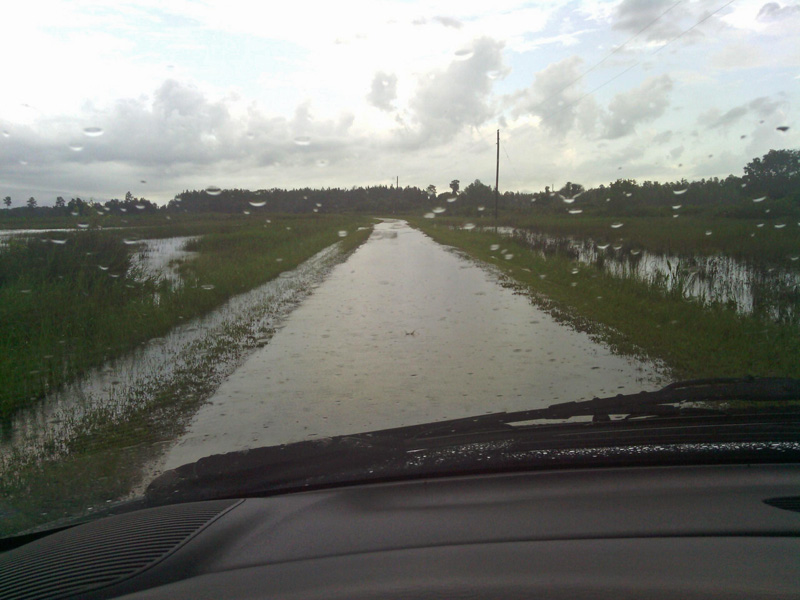 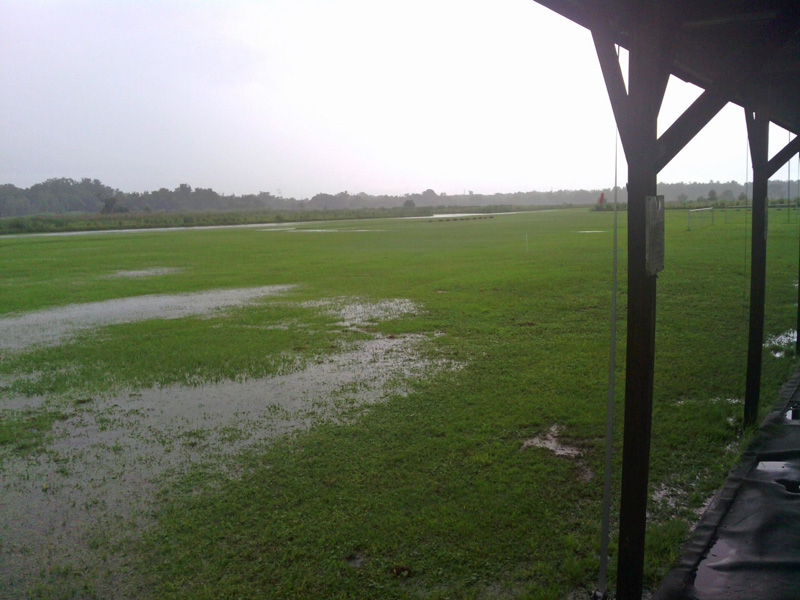 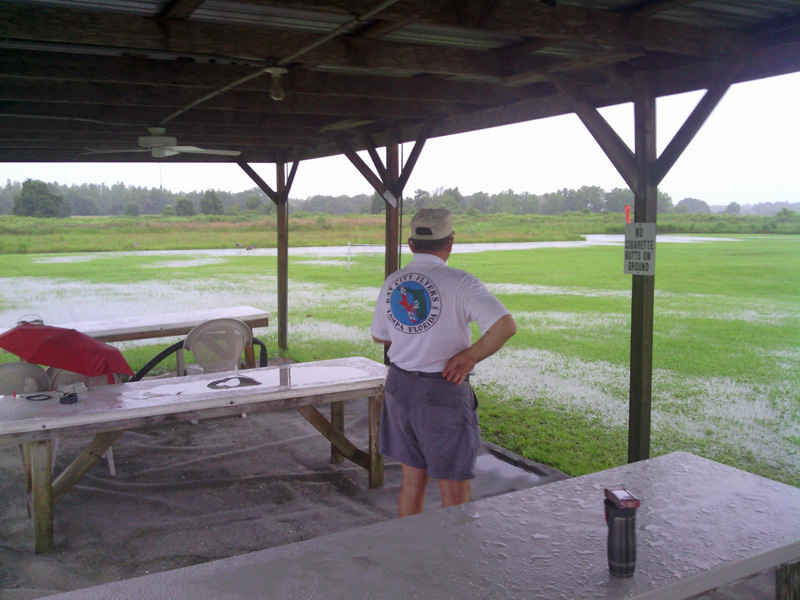 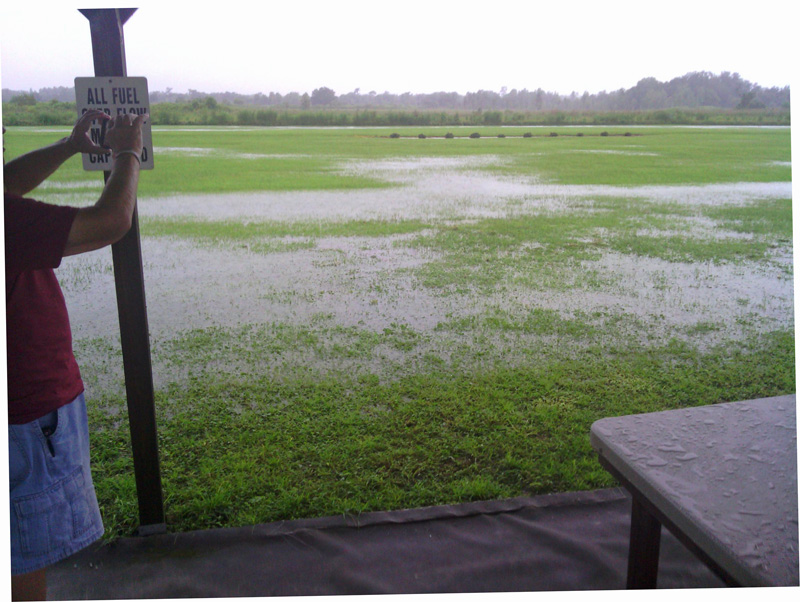 On a beautiful, sunny Saturday in May, a group of JROTC Cadets from F.W Springstead High School enjoyed interacting with and learning from veteran R/C aircraft pilots from all around the region. This event, sponsored by the Bay City Flyers, was a first for the Cadet Corp and an event that will be remembered well into the future.

The sponsors of the event, The Bay city Flyers, are an RC Aircraft flying club located in Land O' Lakes, FL. This club is made up of flying hobbyist from around the Bay area. The idea for this event began during a presentation by retired Air Force Lieutenant Colonel Darryl Sweetwine. As a Springstead High School Teacher and a Bay City Flyers Member, Mr. Sweetwine realized the opportunity to bring the two groups together. The Club’s membership unanimously approved this event and provided several trainer aircraft, including two monoplanes and a glider. Cadets were allowed to fly these aircraft with the guidance of experienced instructors from the club.

The cadets arrived at the flying field at 9:00 AM on May 9th and were treated to donuts and juice while receiving a basic safety briefing. Mr. Bruce Baltera, the Bay City Flyers president, gave the safety briefing and a general introduction of the club members. Next the students were divided into three groups and assigned an instructor. The pilot instructors then taught them the terminology and basic flying science required for a successful flight. Upon completion of this final lesson, Cadets took the controls and took to the sky!

A few of the club’s experienced flyers also came out and showed off some of their personal equipment. On display were stunt helicopters, stunt planes, speed airplanes, and large scale replica aircraft. These examples of how the hobby can grow truly peaked many Cadets’ interest. Especially the extremely fast, upside down flying stunt helicopter that seemed to be attached to strings in the sky.

The Cadets formed an R/C Club and began making plans for the May 9th field trip back in January. Meetings were held and students learned the basics of R/C flying while accumulating the required hours on the flight simulator. Upon completion of at least 5 familiarization flights, Cadets were invited to the event with the Bay City Flyers. The Cadets also joined the AMA (Academy of Model Aeronautics), which opens the door for them to join the Bay City Flyers or any other local club in the future.

At noon, the club supplied lunch for the cadets and continued to wow them with flights from a very large Bi-Plane on its maiden flight after a major accident and rebuild. The Cadets and the club all had a good time and everybody learned something. The day concluded with the presentation of a certificate of appreciation from the FL 952 JROTC Cadet Corp to the Bay City Flyers. The certificate was created to express their appreciation to, not only the club, but the volunteers as well. 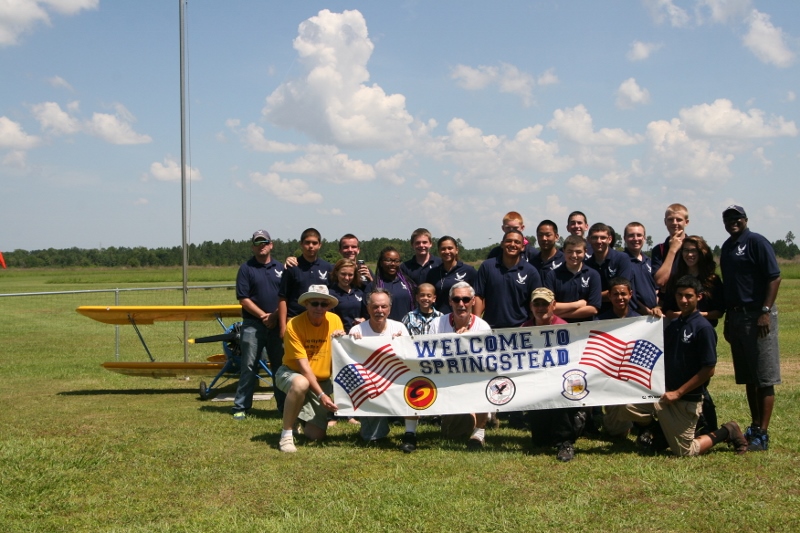